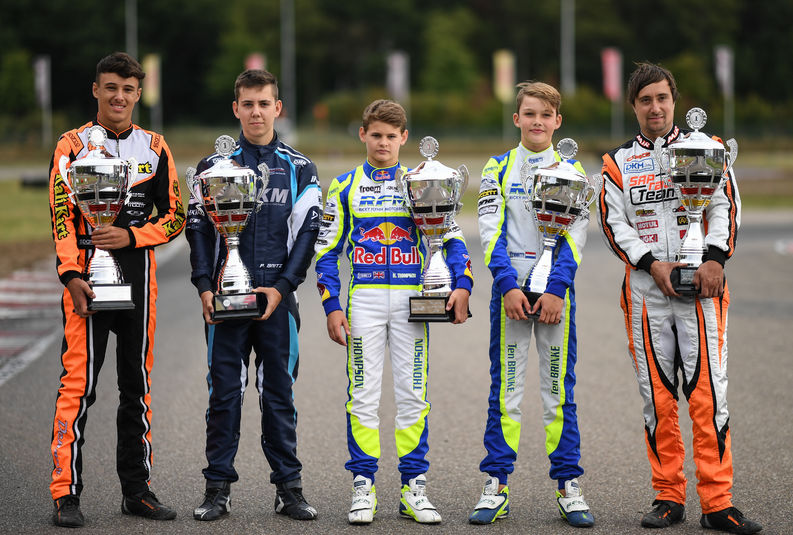 Sun and rain at DKM half-time event in Kerpen 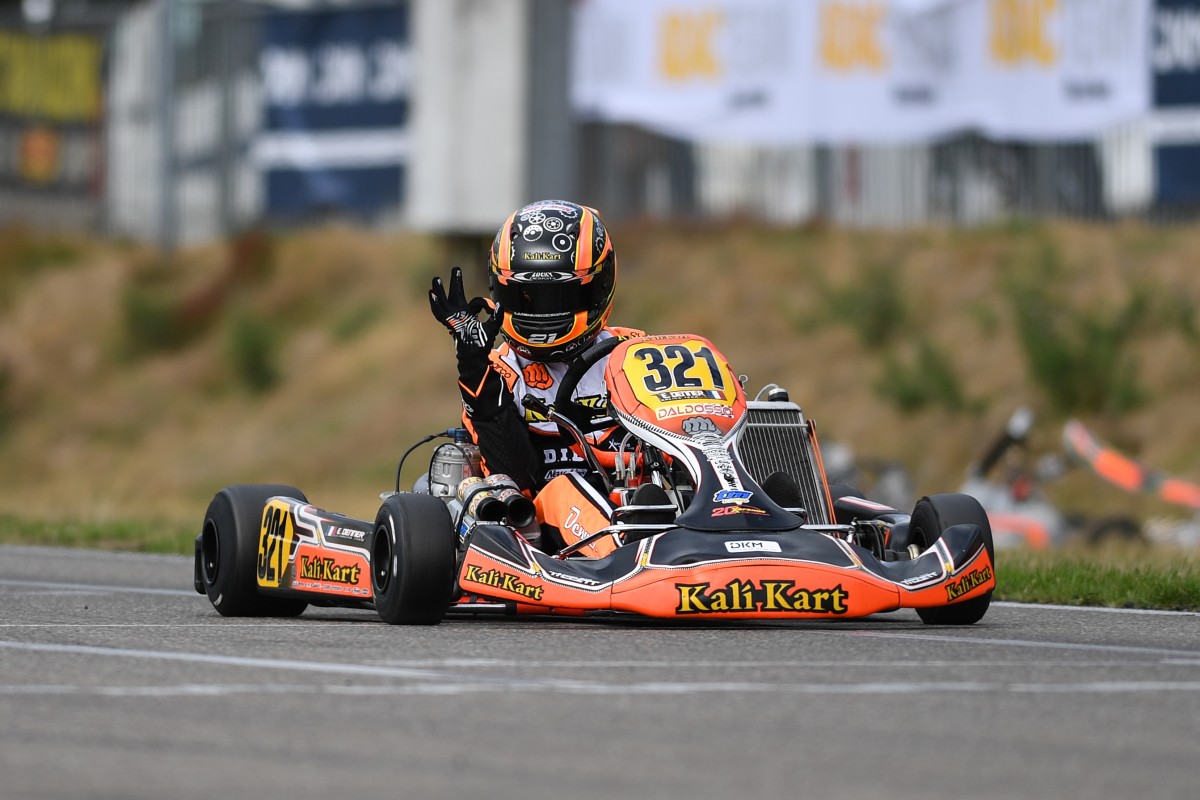 The German Kart Championship travelled to the Erftland for the season half-time. On the venerable Ring in Kerpen, the ranked races five and six took place. 164 participants started and experienced thrilling races in changing weather. There were five double winners at the final races.

After a nine week long break, the highest German kart racing series continued in Kerpen. The venerable Erftlandring was the location this time. The 1.107m long track was the birthplace of seven-time Formula 1 World Champion Michael Schumacher, his brother Ralf as well as four-time F1-champion and DKM-patron Sebastian Vettel.

This weekend, 164 drivers from all over the world fought for victories and championship points in the five DMSB grade series DKM, DJKM, DSKM, DSKC and DEKM. In changing weather on Saturday, drivers, teams and helpers were especially challenged. On Sunday it stayed dry and the races took place in best conditions. In the end, there were four double winners: Harry Thompson (DKM), Robert De Haan (DJKM), Stan Pex (DSKM) and Davids Trefilovs (DSKC).

Extensive coverage online and on Motorvision.TV

For the first time, the automobile-, engine- and motorsports-channel Motorvision.TV accompanied the races of the DEKM live. On Saturday and Sunday, the live-stream was broadcast on the channel’s website. Next week, all races of the weekend will be accessible in full length on the YouTube-channel of the DKM. 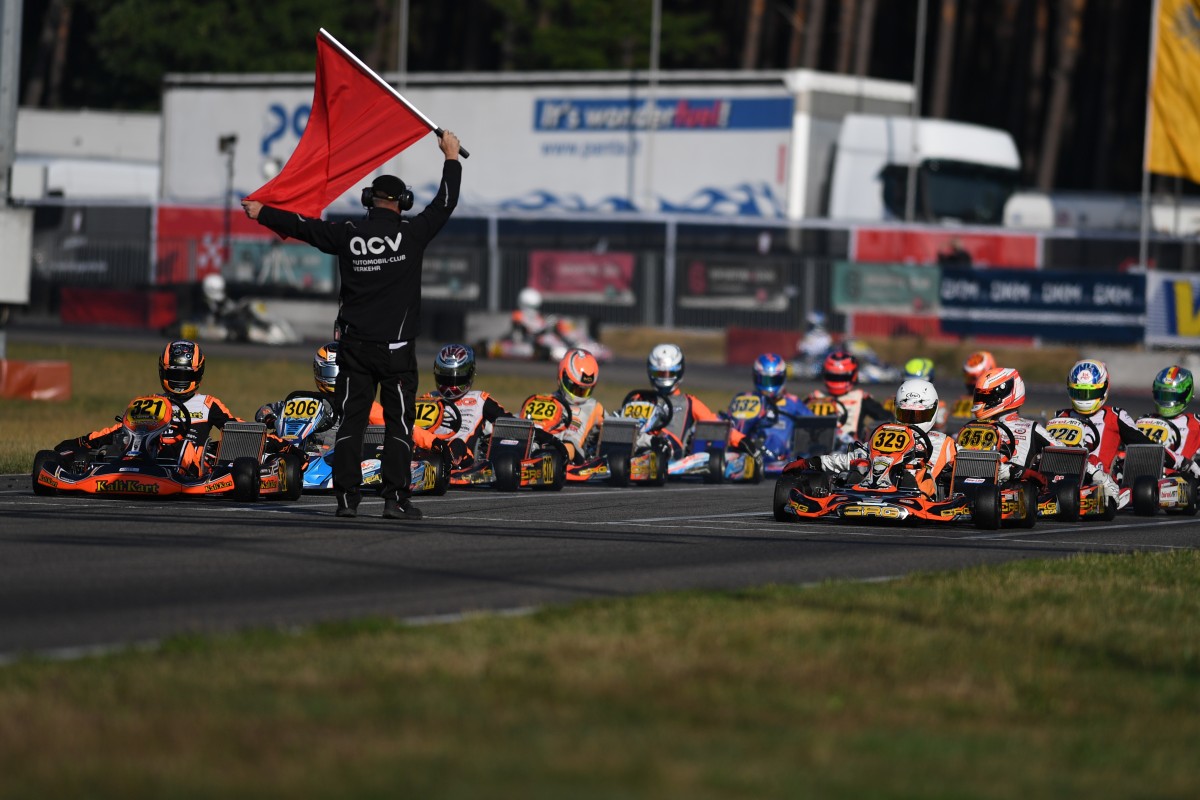 With US-American Connor Zilisch (WARD Racing), there was a first surprise at qualifying of the juniors. He achieved pole position for the first time, but fell back during the heats and gave the lead to championship leader Robert de Haan (Energy Corse). He achieved the top position on the interim rankings due to a victory and a second place. During the two final races on Sunday, the Dutchman was able to tie in with his performance of the previous day. He defended his first place and achieved a considerable advance during the course of the 18 laps. “I always do my best and am happy to have won both races. I was able to drive off from the start and then tried to defend my lead”, the 13-year-old youngster rejoiced.

There were several duels regarding the following places though. During the first final, Christian Ho (Ricky Flynn Motorsport) drove securely on second position. Seven drivers fought for third place though. In the end, Tasanapol Inthraphuvasak (KR Motorsport) won this one. Behind him, Emil Tanggard (HK Motorsport) and German Daniel Gregor (Junior Team75) followed. The latter took the lead of the field of pursuers for a long time during the second race. Shortly after half of the race, the pressure by Christian Ho became too much though and he had to let him pass by. Until the finish line, the German then had to fend off the attacks of further pursuers, but came in third in the end. The cup ranks were completed by Levente Revesz (KR Motorsport) and Luca Leistra (RS Schumacher Racing Team).

Dutch rookie Senna van Walstijn (SP Motorsport) dominated the events on Saturday. In a mix of sunshine and rain, he won qualifying and both heats. The field consisting of 37 drivers was once again divided into two groups for the pre-final. During the first race, Van Walstijn was unstoppable again and he secured pole position for the final race. An equally dominant performance was delivered by Davids Trefilovs (SRP Racing Team) during the second pre-final. The Maranello-driver also had a considerable advance and completed the first starting row for the final race.

Both winners then fought for victory of the final race. Trefilovs achieved a better start and directly took the leading position. During the first half of the race, Van Walstijn stayed in his wind shadow and fought for victory. In the end he had to let Trefilovs drive off though and came in second. “This was a hard race. I took the lead due to a good start and then defended my position. My team and I are very content”, the winner from Berlin summed up. Third winner Valentino Fritsch (BirelART Racing KSW) had to show his fighting spirit until the finish line though. Konstantin Kapetanidis (CPB Sport) was right at his bumper, but couldn’t find a way past him. Patrick Kreutz (RS Motorsport) came in fifth on his home track, but a time penalty threw him out of the cup ranks. Tim Tröger (Mach1 Motorsport) inherited his position. Championship ranking DSKC after 6 of 10 races:

Qualifying of the German Shifterkart Championship (DSKM) ended with a bang. Reigning champion Fabian Federer (SRP Racing Team) drove a new track record and simultaneously gained pole position for the heats. Next to the South-Tyrolean, four drivers drove faster than the up until then best time on the 1.107m long track. During the heats, Stan Pex (SP Motorsport) then made himself known again. The Dutchman won both heats and thereby was the title favorite for the final races.

In the first final race, he won the start but had to bow down to Emilien Denner (CPB Sport)’s attacks after a few laps. The reigning DSKC-champion drove away from his pursuers and won. Afterwards, a spoiler penalty threw him back though and he was only ranked fourth. Thereby, Stan Pex was the new winner in front of his brother Jorrit. Leonardo Marseglia (BirelART Racing KSW) came in third and also ended up on the winners‘ podium. Overall leading driver Fabian Federer (SRP Racing Team) had a bad start: After the first lap he was only on thirteenth place, but fought his way forward to fifth. 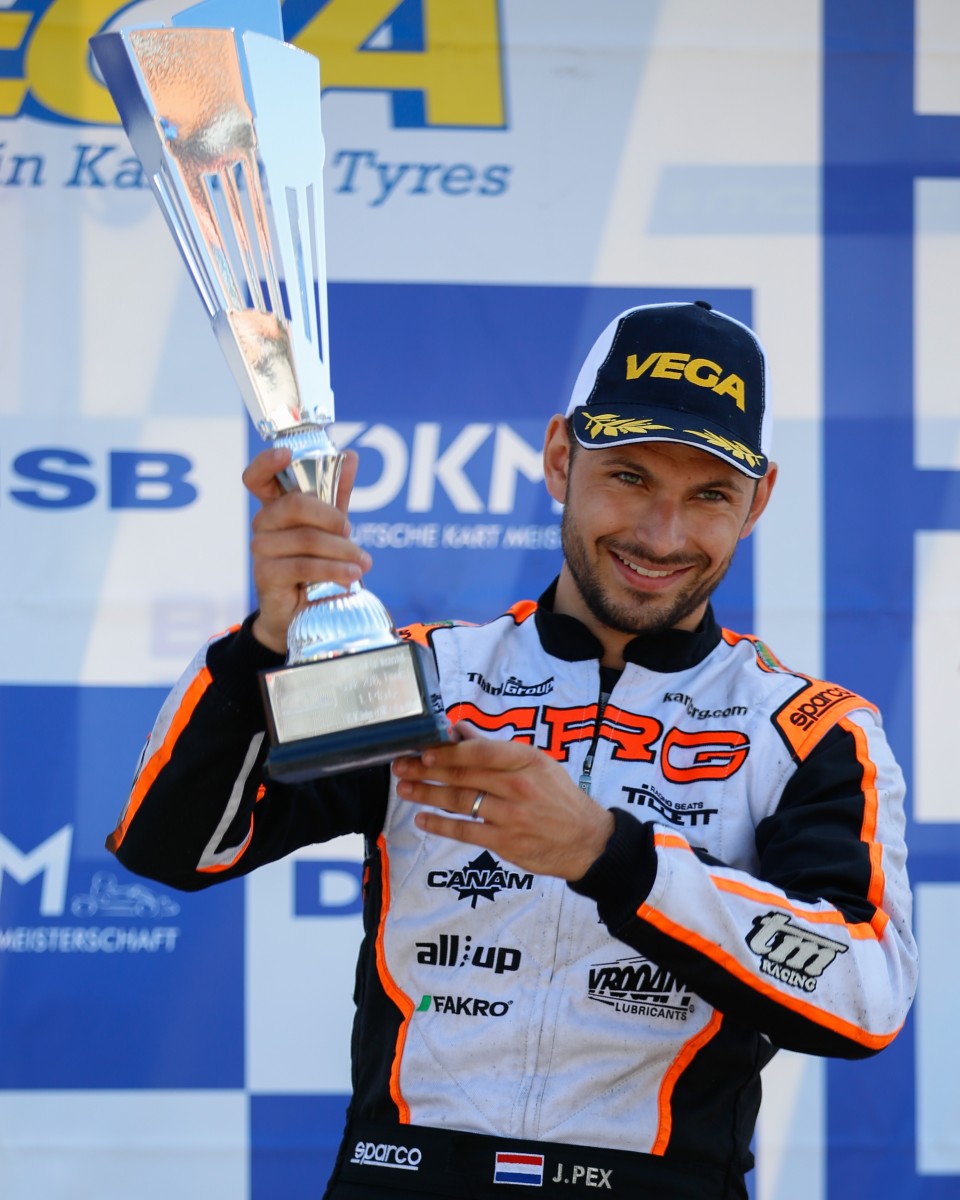 In 2018, Jorrit Pex (brother of Stan Pex) held his throphy. This year, he was less lucky, but brother Stan is beaming with joy.

The second final race started with another setback for Denner. During the starting phase, he was involved in a collision and had to quit the race. At the front, the Pex brothers set the pace in the meantime. While Stan was unstoppable and drove towards his double victory, his brother Jorrit’s bad luck continued. Nine laps before the end of the race, he had to prematurely quit. Second place went to Federer, who had lost lots of positions after the start again and fought his way forward during the course of the race. This time, he fell back to fifth place due to a spoiler penalty though. Marseglia ended up on the podium again as the second winner in front of his brand colleague Riccardo Longhi (BirelART Racing KSW) and Jeremy Iglesias (RS Schumacher Racing Team). At the finish line, Stan Pex was beaming with joy: “This is the third year in a row that I’ve achieved a double victory here in Kerpen. This has never been done by another DKM driver. The competition is really strong, that’s why this success is worth so much.”

Reigning champion Harry Thompson (Ricky Flynn Motorsport) came back to the DKM-events with a best time at qualifying and drove among the front field during the heats as well. Kas Haverkort (CRG Keijzer Racing) jumped all the way to the top though. The two of them fought for victory during the first final race as well. Haverkort led the first race, but Thompson kept close and reversed the order a short time later. The Brit won in front of Haverkort and Hugo Sasse (TB Racing Team). Behind the three winners, the other positions were quickly taken as well. Luca Griggs (Kartshop Ampfing) and Felix Arnold (TB Racing Team) followed on fourth and fifth places.

Kick-off winner Harry Thompson also achieved a safe victory at the second final race and summed things up positively: “Even though it may have looked like it, this was not an easy race. During the last ten laps, Alex came closer and closer and I had to try to keep him at a distance. In the end this worked out and I’m happy about the double victory.” Behind him things got dramatic though. Haverkort and Sasse fought for second place. Alexander Tauscher (Junior Team75) profited from this, came close and drove past them. During the course of the race, Haverkort had to quit the race due to an engine defect and had to watch as Ben Dörr (TB Racing Team) fought his way forward and came in third behind Tauscher. Sasse came in fourth in front of Niels Tröger (CRG Keijzer Racing).

The German Kart Championship with its grade series is going to continue in three weeks in Belgian Genk. There, the first title decisions could already be made.