Travisanutto in OK and Amand in Junior, new winners at Genk 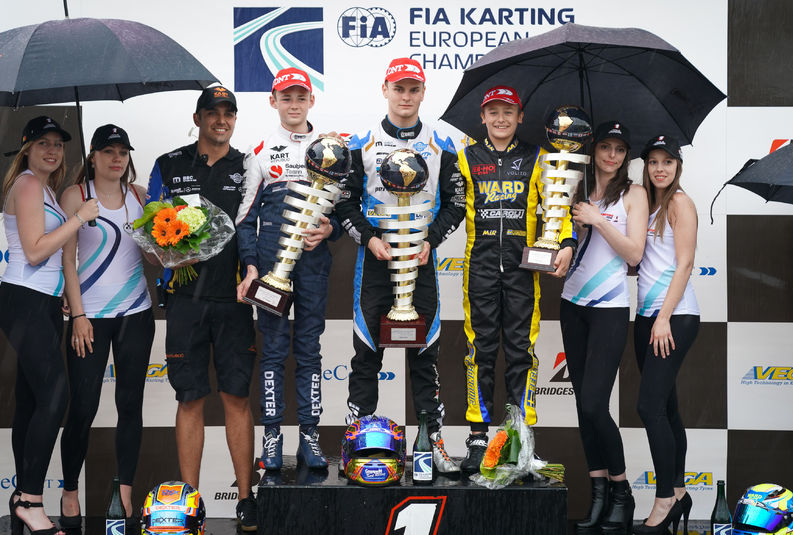 The second Competition of the FIA ​​Karting European Championship - OK & Junior was very complex to manage for the participants in the Kart Grand Prix of Belgium in Genk. The rain spared none of the three days of racing, however the Finals were fortunately able to take place on a dry track. Marcus Amand (FRA) won in Junior and Lorenzo Travisnutto (ITA) won the OK Final with a strong lead just before a storm.

After a Saturday full of comebacks, the last Qualifying Heats on Sunday morning further increased in intensity before deciding the 34 Finalists in each category. The choice whether to mount a new set of tyres or not in the last Heat rather than waiting for the Final caused performance differences and sometimes surprising results. After a Junior Final held in good weather, the sky became threatening for the OK Final. Fortunately, the track was dry for 20 of the 23 laps and the Clerk of the Course interrupted with a red flag before the conditions became dangerous.

Felipe Massa, the President of the CIK-FIA attended the great spectacle of the Finals close to the track with great interest. The special conditions of the Genk Competition have caused significant changes of position in the standings of the two categories of the FIA ​​Karting European Championship racing in Belgium.

Leader at the end of the Qualifying Heats, Nikita Bedrin (RUS - Tony Kart / Vortex / Vega) shared the first row of the Final grid with Alexander Dunne (IRL - Tony Kart / Vortex / Vega), ahead of Thomas Ten Brinke (NLD - FA Kart / Vortex / Vega) and Marcus Amand (FRA - Kosmic / Iame / Vega). Robert De Haan (NLD - Energy / TM Racing / Vega) joined in the fight while Andrea Kimi Antonelli (ITA - KR / Iame / Vega) was close to the top five. In the lead, Ten Brinke, then Dunne succeeded Bedrin. However, Amand quickly overcame his first less successful laps and inexorably came back to the lead. He took 2nd shortly after mid-race and attacked Dunne three laps from the finish. Marcus Amand won his first victory at this level with the VDK Racing Team, followed by 6 tenths by Alexander Dunne with the Tony Kart Racing Team. Bedrin was downgraded two places by a penalty and Thomas Ten Brinke of the RFM team took 3rd position, followed by De Hann. At the end of a very bad weekend, Tuuka Taponen (FIN - Redspeed / Iame / Vega) regained another 13 places in the Final and remained in the top five of the provisional classification, now led by Ten Brinke.

Provisional ranking of the FIA ​​Karting European Championship
- Junior after the second Competition at Genk:

Travisanutto unrivalled in the OK Final

The last Qualifying Heats enabled two World Champions to fill the first row at the OK Final: Pedro Hiltbrand (ESP - CRG / Iame / LeCont) and Lorenzo Travisanutto (ITA - KR / Iame / LeCont) were in front of their younger opponents, the surprising Morgan Porter (GBR - KR / Iame / LeCont) and Nikolas Pirttilahti (FIN - KR / Iame / LeCont). Travisanutto moved into the lead shortly after the start and was not going to be dislodged, steadily increasing his lead. On the other hand, the fight was thrilling for 2nd position. Hiltbrand soon gave in to Porter, but Dilano VanT'Hoff (NLD - Exprit / TM Racing / LeCont) overtook him after seven laps and adventures followed. Dexter Patterson (GBR - KR / Iame / LeCont) was 8th at the halfway mark with good pace and finished 3rd. He approached Van T'Hoff without being able to attack him. A few laps from the goal, the angry sky began thundering and growling as the rain began to fall. The race was stopped on the 20th lap and Travisanutto won an impressive victory for the CV Performance Group with a lead of more than 10". 2nd to cross the finish line, Van T'Hoff was 11th after an improperly positioned front fairing penalty and Patterson, a member of the Sauber Karting Team, was on the second step of the podium ahead of Dino Beganovic (SWE - Tony Kart / Vortex / LeCont) from Ward Racing.

Provisional classification of the FIA ​​Karting European Championship
- OK after the second Competition at Genk:

The next FIA Karting European Championship Competition - OK & Junior will take place from 31st May to 2nd June in Sweden at the Kristianstad circuit.